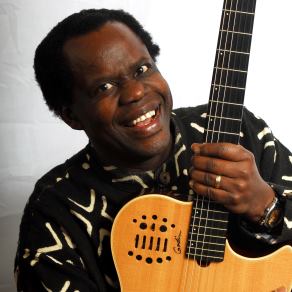 Valanga Khoza left South Africa in 1976, exiled along with many other young people because of their struggle against apartheid or racism.  The music and stories he has since created reflects the places he has been and the people he has touched throughout his journey across the world as a refugee, finally settling in Australia. As well as recording six albums of original music, he is also the author of well-known Gezani and the Tricky Baboon illustrated by Sally Rippin and republished by Ford Street in 2014. In September 2019 he will release his second picture book, Dumazi and the Big Yellow Lion, illustrated by Matt Ottley and with music composed by Matt Ottley and Valanga Khoza and published by Scholastic.

Valanga charms his audiences with humour and wit, telling stories that are embellished by beautiful music form many traditional instruments such as the kalimba, marimba and shijoro (jaw harp) as well as irresistible rhythms from the guitar, percussion and Valanga’s velvety voice. Valanga has performed and warmed audiences of adults and children at selected world music events and in many schools across Australia and the Pacific.